← GDPR and child performance licencing – are you up to date?
Gloucestershire Music’s new model for whole class ensemble teaching through mixed instruments →

This blog is part 1 of a series of case studies about the work of hub partners in reaching more young people with music in Gloucestershire. Case studies are taken from our most recent annual report so some programmes will have ended, but they are representative of the work of the hub that is ongoing. 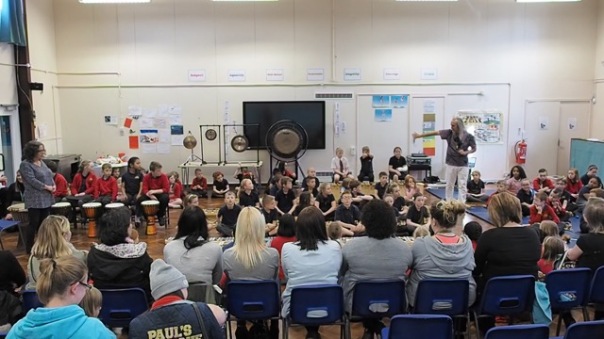 It’s unusual for Groove On to take their work beyond ‘first access’ with the same group of students, but at Innsworth Junior School they were able to do just that.

Their Whole Class Ensemble Teaching residency in Summer Term 2016 involved children they had worked with two years before, at Innsworth Infants.

At the infant school, Groove On music leaders Eddie and Elaine Furness had worked to give children the foundations of all music skills – especially listening and basic ensemble skills.

Two years later, we’re pleased to see how these children, now in Year 4, were able to tune in to more sophisticated music and take part in a large scale performance with lots of changes and more exacting demands.

The Dragon Song performance involved around 75 performers.  Some parts of the piece involved all children; some sections were performed by separate classes; some individual children were featured as soloists.

The opening of the piece described the Dragon’s cave, dripping, dank and glittering with gold and treasure; the drums and percussion represented the stomping dance of the fiery creature; and the piece was exquisitely topped off with interlocking patterns from the xylophone orchestra, including two great jazzy solo improvisations.

You can read more case studies in our Annual Report

← GDPR and child performance licencing – are you up to date?
Gloucestershire Music’s new model for whole class ensemble teaching through mixed instruments →